Many of my lunch time breaks from work often found me at either Eastern Counties Wellington Road or at Beach Coach Station. Or sometimes both! 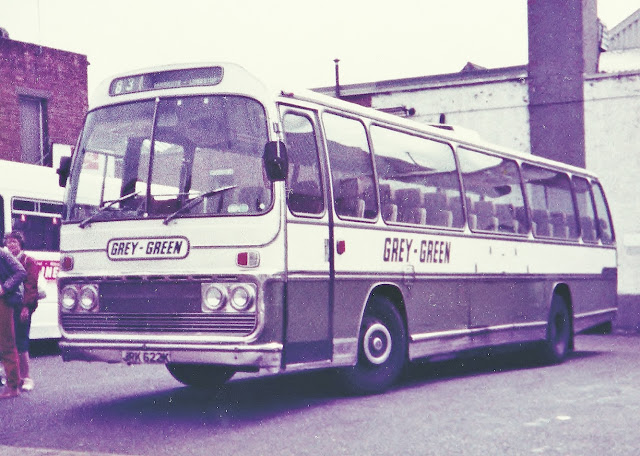 On 22nd July 1982 my photo album records that I took this picture on the rear coach park at Wellington Road. It unusually shows Grey Green Leyland Leopard/Plaxton Elite II JRK622K laying over there. That is probably unusual as I believe their coaches normally used to park up at Beach Coach Station

The coach was new to the company in April 1972 and was re-bodied ten years later with a Duple Dominant body and re-registered TMU 847Y. It left the company towards the end of 1976

Grey Grey was part of the Ewer Group which previously terminated their London services at their own Apsley Road Coach Station in Great Yarmouth. The site was situated behind the current Tower Building and is now used for housing. My old friend from across the pond, Mick Capon tells me that the original Grey Green garage in the town was located on St Nicholas Road

Roy
Posted by eastnorfolkbus at 10:10