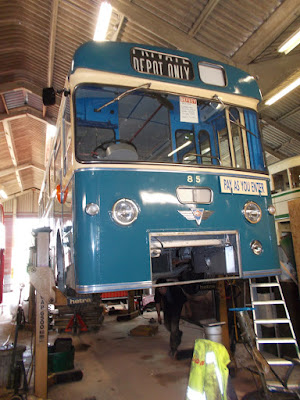 As you will probably know by now, two Great Yarmouth single deckers with the fleet number 85 are now preserved locally with the most recent limelight taken by the return of the prodigal son

However, the AEC Reliance adorned with the 85 number (AEX85B) is in the care of the East Anglia Transport Museum (EATM) and is currently undergoing repair as Tim Major relates


'I thought you might be interested in an updated on 85 at the EATM as it has been confined to the depot for sometime! This is due to a bearing failure in the gearbox and the consequent damage caused to the gears by fragments bouncing around inside, which adds up to very expensive repair. Fortunately the museum had a spare gearbox which provided parts to effect the repair, I attach a couple of pictures, one showing 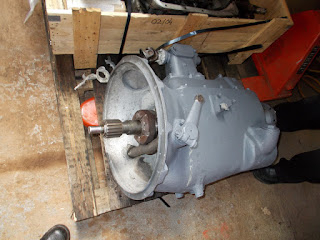 the gearbox on its return from repair and the other shows 85 on the lifts awaiting the reconnection of the gearbox. (I have not heard whether all is in order as I had to leave before it was tested)


Additionally LFL57 has been off the road awaiting a radiator re-build, now fitted and a couple of other repairs. Again the cost of the repair to the radiator was 'jolly expensive' (understatement!).'

Many thanks to Tim for the update and photos