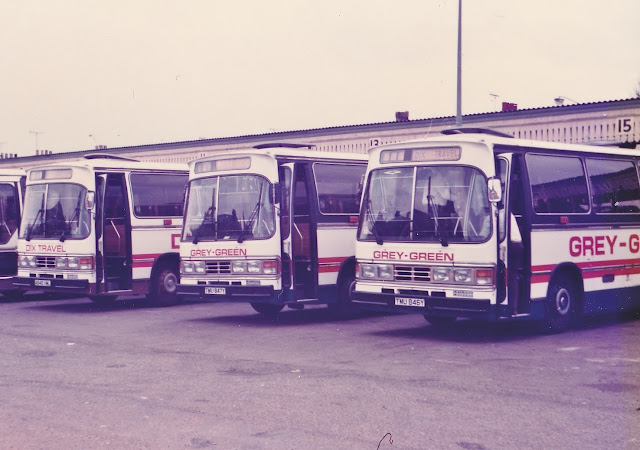 I quickly glanced at the photo and initially thought there was a trio of Grey Green coaches but I was wrong. The one on the left IS from the Ewer Group but the Dix Travel subsidiary. Leyland PSU3E/4R A848VML was registered new in 1983 but was in fact was a rebuild of FRA64V delivered new to Skills of Nottingham in August 1979. It later saw service with G & G Travel in Leamington

The other two vehicles are also 1983 rebuilds; TMU845Y and TMU846Y were respectively JRK621K and JRK618K. The Duple bodied Leyland PSU3E/4R's were therefore sister vehicles to JRK622K featured last week which was also rebodied at the same time becoming TMU847Y. TMU845Y later saw use with Hills of Tredegar

Roy
Posted by eastnorfolkbus at 09:15