After a short period of stability, First continues to move around its vehicles at local depots. 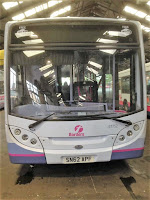 Meanwhile, First Great Yarmouth StreetLites 47505/6 SN64CPZ/CRF are travelling down to Simon Morris at Ipswich today for the application of their Norwich Charcoal line livery. One of the former's last use as a Great Yarmouth vehicle was on the 8 between the James Paget Hospital and Caister's Second Avenue during yesterday evening.

Finally, confirmation on the arrival of a sixth ex First Borders Enviro300, 67752 SN62APF at Caister Road, just after lunchtime yesterday.

Roy
Posted by eastnorfolkbus at 08:22