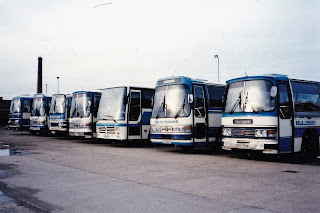 Further to our Throw Back Thursday feature on Belle Coaches at Horn Hill in Lowestoft, I have been able to identify the original registration of OJI4627.

Both Robert Kelly and Mark Cockrell emailed to say that the Duple Dominant bodied Bedford YNT was previously WRY77X. Robert also reported that it arrived at the Suffolk independent during 1985 having been new to Back of Witney in Oxfordshire in July 1982,

Robert also added that Belle's recent arrival was a Scania K410EB4 with the cherished registration of BC17BEL, delivered to their Leiston depot during March.

My thanks to Robert and Mark for the information provided.