This week's Throw Back Thursday looks at the large influx of Ford Transit and Fright Rover Sherpa minibuses into the Eastern Counties fleet during the mid 1980s.

Just about all of them gave less than ten years service and the photos accompanying this post show the 'bread vans' (as they became affectionately known as) awaiting their fate at the rear of Ipswich's Foundation Street depot sometime during 1993. 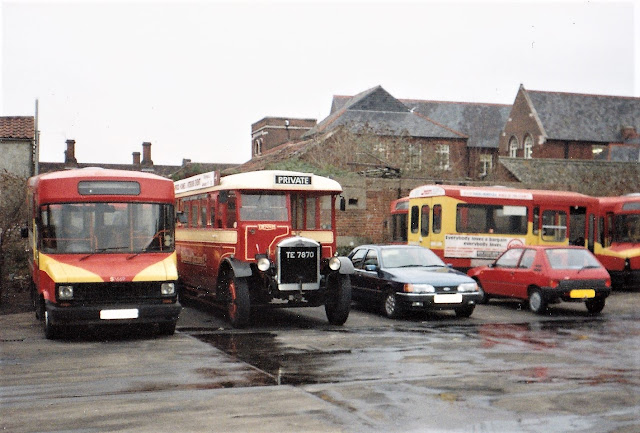 The second photo shows Dennis TE7870 surrounded by the Sherpas (wonder what the name is for a collection of Sherpa Minibuses?!!) On the left is SD669 D669HAH which was new in November 1986 but ended its days at Manor Farm in Ringsfield being acquired by a Mr T Davies in 1993

TE7870 is a preserved 1929 Dennis 29 seat single deck bus owned by Buckland Buses which has a maximum speed of 30 mph. Further information on the vehicle can be viewed HERE

Since the mid 1980s the 16 seat minibuses have been replaced with larger vehicles with frequencies consequently reducing. However, a subsequent culture change means that passengers are now less likely to want to wait for the bus to arrive; expecting an instant service. This has been recognised by Stagecoach which is experimenting with the introduction of Mercedes Benz Sprinters on services in Ashford, Kent. No doubt many operators will be monitoring how well the service performs.

Roy
Posted by eastnorfolkbus at 10:52