For this week's Throw Back Thursday we travel back in our time machine to 28th January 1995 to Beccles Old Market Bus Station. 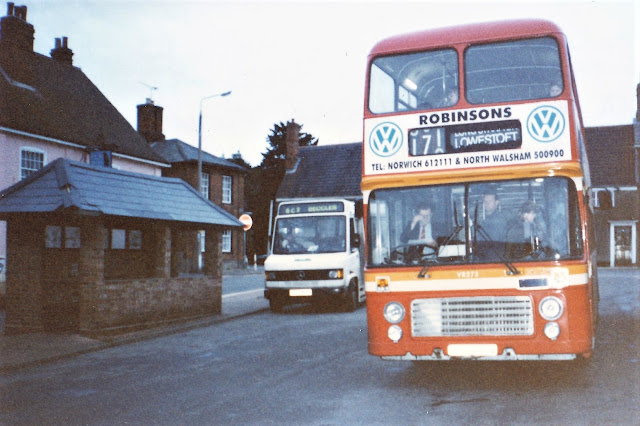 The photo shows Eastern Counties Eastern Coach Works bodied Bristol VRTSL6G TAH273W. As VR273, it was new to the company in May 1981. It has just arrived on the 171 service from Norwich and the driver appears to be consulting his fares table before issuing a ticket prior to departure to Lowestoft.

VR273 met an untimely end in 2000 when colliding with a sugar beet lorry which was reversing out of a lane/field hidden by a hedge. The driver, who was lucky to survive, had to exit the bus via his cab window. A photo of the damage can be viewed by clicking HERE. It was disposed of to Spall of Dallinghoo (near Woodbridge) soon after.

At the adjoining bus stop is Waylands Minibus F122KAO about to work Beccles town service C2 to Banham Road. The Mercedes Benz 609D was new to North Western in July 1989.

My apologies for the photo quality as it was taken in fading light plus the standard of photo processing doesn't help either!

Roy
Posted by eastnorfolkbus at 10:29