Surprisingly advertised for sale on the Anglian Yacht Brokers Limited website is a double deck bus! 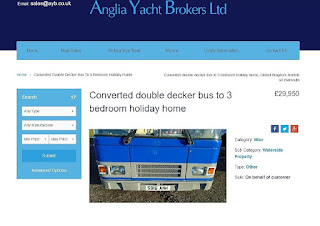 It has recently been converted to a 3 bedroom holiday home featuring a kitchen with two seating areas, flat screen televisions and many original features maintaining its bus character. It has also received an external respray and a new MOT at point of sale. The website entry also features many internal and external views of the bus.

Jamie Skinner first reported a sighting of it on 6th of April last year on the A47 near Thickthorn on the outskirts of Norwich prior to its repaint.


It is an Alexander (Belfast) bodied Volvo Olympian with the registration S916ANH. It was last with Bennetts of Kilwinning in Scotland and was still there in January last year. The Olympian was purchased new by Midland Red (South) in December 1998 and subsequently became Stagecoach Warwickshire 16616.

Currently located in St Olaves near Great Yarmouth, the Olympian is being offered for sale for a mere £29,500


Roy
Posted by eastnorfolkbus at 10:36